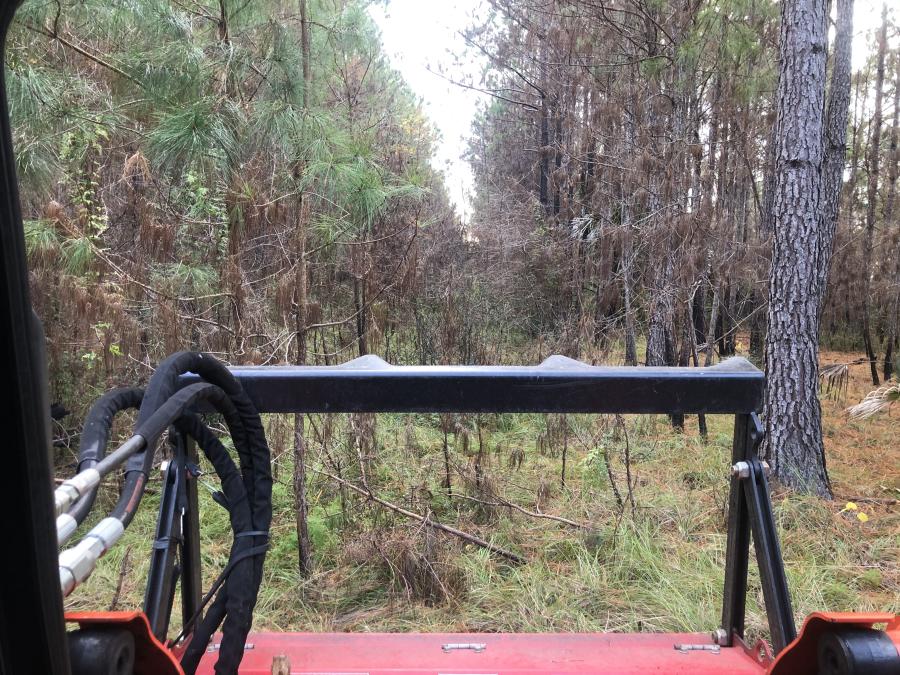 Green Gorilla Lawnscapes routinely clears thick brush and limbs, even standing trees to 8-in. in diameter, leaving behind a carpet of mulch that is easy on the eyes, and on the feet.

What he ultimately found was that a finer finish led to many more starts, due to his RK5015 mulcher from Fecon.

When Beirne retired from the United States Air Force after 23 years of military service as a Joint Terminal Attack Controller and Aerial Gunner, he founded the landscaping company Green Gorilla Lawnscapes, in Charleston, S.C.

Operating with an industrial brush cutter mounted on a Kubota SVL-75 Highflow compact track loader, he did good work for his clients, but still sought out ways to improve his craft.

A conversation about producing a finer sized output led him to Fecon and its local dealer, Steen Enterprises in Adams Run, S.C.

Big Dog With a Big Appetite

Beirne was so impressed the new mulcher that he nicknamed his machine Cerberus, after the mythical three headed dog, because of its voracious appetite.

He routinely clears thick brush and limbs, even standing trees to 8-in. in diameter, leaving behind a carpet of mulch that is easy on the eyes, and on the feet. With a 2,400 rpm rotation speed, a 45V motor, and a 15 in. diameter rotor fitted with double carbide teeth, the RK5015 eats through brush with ease.

Beirne is very pleased with their resilience and service life, putting logging 170.4 hours on the original set of teeth.

"I was finishing up a six-acre tract when the mulcher head shut down. Sometimes pieces of wood get stuck in there, so I got out to check. It wasn't a piece of wood. An old bulldozer sprocket was hiding under the brush. I'd have never seen it walking by," he said.

"This thing chewed it up, but it nicked up my two teeth pretty good, but that thing still cut like a champ. By the end of the day, the teeth worked themselves out. It was pretty cool to see."

Beirne flipped the teeth at 98.7 hours and greases his machine every four hours.

"If you grease it and take care of it, it'll last. I haven't had any issues."

Much of Green Gorilla's work comes from a real estate developer, who's actually the customer who requested a finer product, which led him to Fecon. When the developer buys land to show to potential buyers, he brings in Beirne to clear a path for them to walk along to see the property.

"He buys it up and brings me in there to clean it up. We make paths so the customers who fly in from out of town can get a better appreciation of the property. They don't want to walk through brush."

Beirne clears the brush and leaves a nicer, finer mulch that's much more pleasant to look at and walk on. It's better for the developer, so he keeps using Green Gorilla for his land clearing projects. 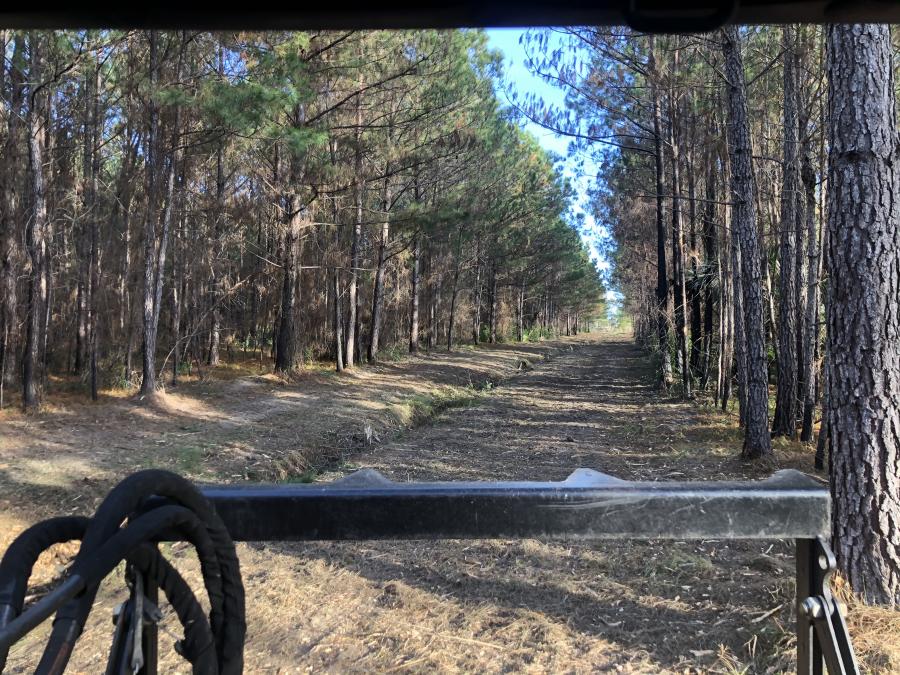 With the Right Equipment, The World is Your Oyster

Beirne recently did a brush clearing job for an oyster farm. The farm had been logged about 5 or 6 years ago and was littered with 19 acres of brush.

"It was just overgrown with pines anywhere from three to eight inches, scrub brush. Invasive species like the Asian pear tree, the holly was really thick. You name it, it was in there," he recalled.

The live foliage wasn't his only problem, however.

The stumps can be a challenge, but Beirne is very happy with how his RK5015 handled these stumps.

"This head brought them right down."

The oyster farm job took about 8 days and covered soft ground, hard ground, riverbeds, drainage ditches, and everything in between. Beirne was hired to clear the land so that it could be usable again for other purposes.

"It was both aesthetic and to get functionality," he recalled. They couldn't use the land when it was covered in brush, and they wanted it to look nice.

"The biggest thing they've told me is the job is neat and clean when it's done compared to what it used to look like. The guys at the oyster farm told me they've dealt with a lot of guys that've come in there with mulchers, but he said that our output looked the best."

The oyster farm was so pleased that it hired Green Gorilla for several future landscaping projects. One particular job he's looking forward to is clearing out old dried-up oyster ponds.

"They're man-made oyster ponds which are overgrown with brush. I'll be driving down into them and cleaning out the ponds themselves. They're all dried out, of course. When we finish, they will have more ponds where they can grow oysters in there again. The initial clearing project was mainly for aesthetic and to clean up all the logged area so they can facilitate the land for other functions."

Beirne also appreciates the ability to do residential work that the RK5015 gives him.

"I can pull my machine right back there and go between trees because it's so maneuverable. I have the ability to go right up to the tree without nicking it. People are ecstatic about it. I can go right into their backyard," said Beirne.

"It's blessed because you can get anywhere with that thing, in between trees, get good angles that the big ones can't."

The RK5015 can work in tighter areas and leave a better finish, making it very helpful to use in residential work as well as non-residential.

The smaller mulcher head is not to be underestimated.

"At first, some people were like, ‘Man, that's not that big of a machine. You're going to have some long days.'"

Beirne wasn't worried, as he knew Cerberus could handle it.

"It took me 50.8 hours and $522.10 of fuel to complete 19 acres of thick brush and trees anywhere from one-inch to eight-inches. I averaged 5.6 hours a day mulching," he said. "I just recently removed a row of thick brush and 5 in. trees along an old cow fence line at the oyster farm. That 1,000 feet clearing project took me less than an hour."

The more that Beirne gets around, the more work that he generates from satisfied customers. After a storm swept through the area, Green Gorilla was tasked with storm cleanup on a 10-acre property. Rather than collecting the limbs and hauling them off, his Beirne and his crew mulched them in place.

"We were weaving in and out of pines and large valuable oaks to mulch up downed branches. The property owners told me their place looked like a park when I was done, and they were so happy that they did not have to burn anything."

They also were pleased with the price, which negated any fees for hauling and disposal of the vegetative debris. What would have taken Green Gorilla crews all day or more to pick up debris only took them 2 hours to mulch up with the RK 5015.

While on that project, a neighbor asked Beirne to mulch up a large burn pile her husband had accumulated but which the wife did not want to burn.

"I mulched it in less than an hour," said Beirne.

There are a lot of potential projects out there, but that's okay, because Cerberus has a big appetite. 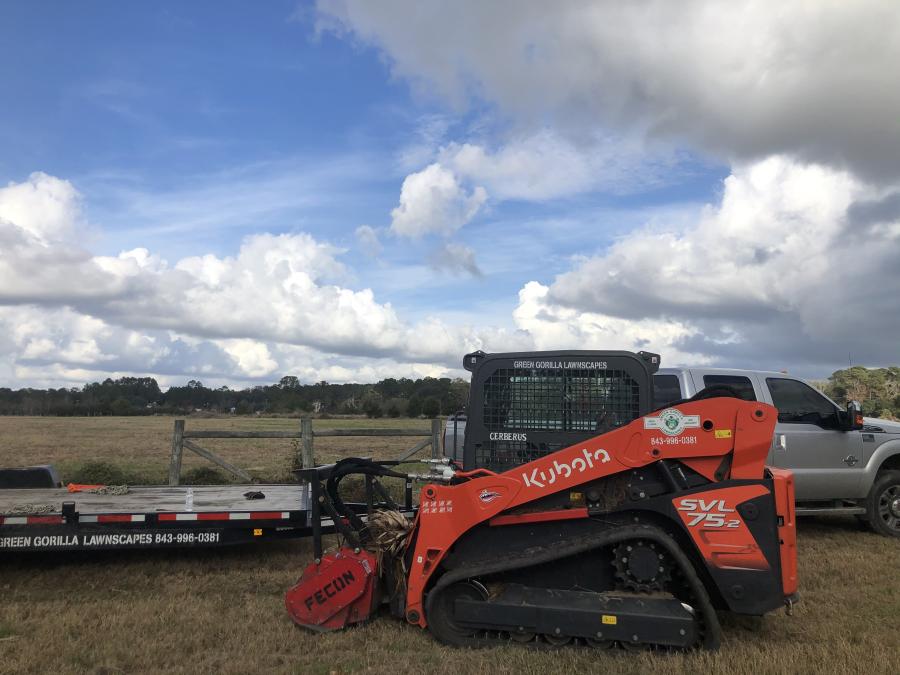 As a school principal who grew up on a farm in North Carolina, Lance Honeycutt is passionate about education and heavy machinery.

Unearthing a Sidewalk After 10 Years →

You may have heard about a bridge to nowhere, but what about a sidewalk to nowhere? This was the predicament one community north of Tampa, Fla., was facing.