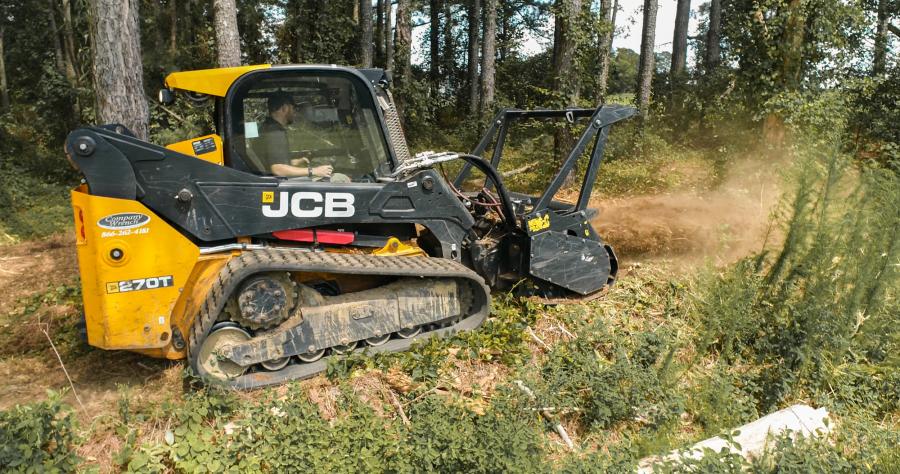 As a school principal who grew up on a farm in North Carolina, Lance Honeycutt is passionate about education and heavy machinery. Both were at the front of his mind when he created his YouTube channel called Honeycutt's Brush & More in 2021.

The channel showcases projects he completes on his family's farm and for his customers as the owner of Honeycutt's Brush. Most of his content involves a JCB 270T he purchased from Company Wrench.

Honeycutt started the channel with a video titled, "Brush Cutting a Neglected Pond." He uses a GoPro camera to show his progress from multiple angles.

Shortly after this video, Honeycutt realized he needed something more than a brush cutter for most of the jobs he wanted to showcase on his channel. He contacted Company Wrench Sales Territory Manager Will Byrd to demo a JCB F60HF mulcher with carbide teeth because he needed a low maintenance, rugged attachment that would handle thicker material.

Honeycutt wanted to assess the JCB F60HF's capabilities in a challenging environment, so he used it in an area filled with trees on his family's farm. Previously, a chainsaw was the only equipment he could use to cut through the large, thick trees and brush in the area.

After receiving instructions on how to operate the mulcher from Byrd, Honeycutt entered the cab and quickly cut his first tree to pieces.

He cut and mulched large trees for several hours before deciding to purchase the mulcher. He showed part of the demo in a video titled "Testing Out a JCB Mulcher," which features more than 14,000 views.

"That mulcher is far and away better than the brush cutter I was using," Honeycutt said. "Mr. Byrd brought it here himself so I could try it out. When I tested it out, I fell in love with it. Trees take years to decompose, but with this mulcher you can cut the tree down to nothing in minutes."

Almost a year later, he has used the JCB 270T and F60HF on multiple customer job sites to clear brush and trees to form paths for trails, increase sight lines for deer hunters, and create functional space for property owners. Videos featuring the JCB F60HF quickly became the most viewed due to the attachment's impressive capabilities.

At the time of this writing, Honeycutt has received nearly 200,000 views on his mulching videos alone.

Honeycutt's comfort with the JCB 270T has only grown since he purchased it nearly a year ago. He has used it for a variety of jobs, including loading bales of hay for his family, moving a fallen tree after a storm and fixing a drainage issue at the church next door.

Honeycutt's channel serves as an educational hub for forestry and mulching enthusiasts. He shows maintenance he performs on the JCB 270T and its attachments to both inform his audience and learn tips from them in the comments.

During the fall, Eco Log presents several, major news on the pendulum harvesters in the F-series. The new updates increase both productivity and performance as well as ease-of-use, safety, and serviceability.