Unearthing a Sidewalk After 10 Years 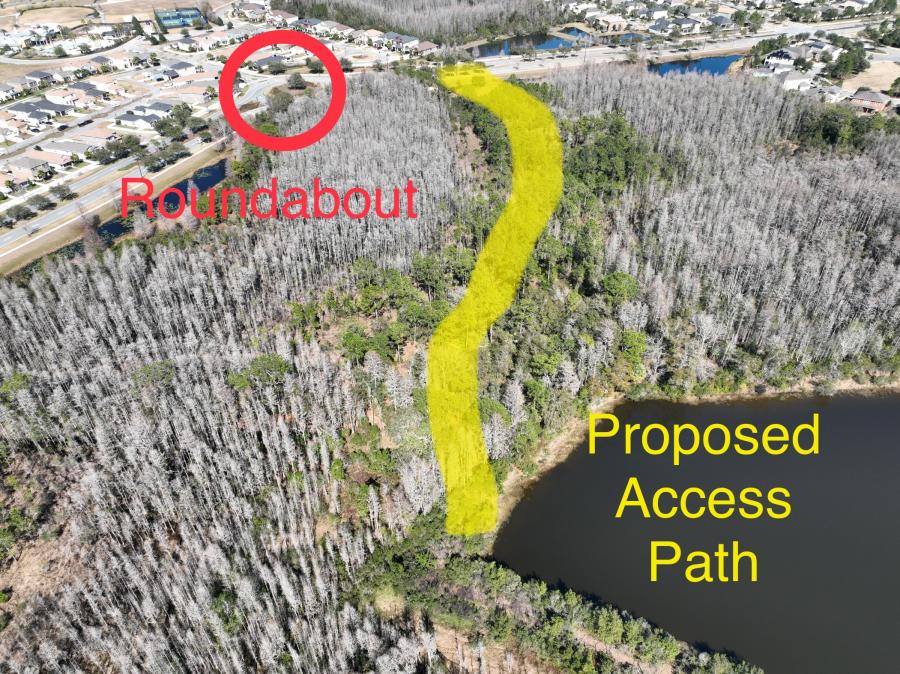 The housing community of Connection, Fla., planned to connect the community's pond to the community through boardwalks. Unfortunately, after cutting the path and putting the sidewalk in, the rest of the project was put on hold.

You may have heard about a bridge to nowhere, but what about a sidewalk to nowhere?

This was the predicament one community north of Tampa, Fla., was facing. After making a 1,500-ft. sidewalk on the back side of a pond, the community couldn't build the accompanying bridges to connect the sidewalk to the rest of the complex.

The housing community of Connerton, Fla., north of Tampa had grand plans for putting in a sidewalk around the back side of the community's pond and then connecting it to the community through boardwalks at each end. Unfortunately, after cutting the path and putting the sidewalk in, the rest of the project was put on hold. Over the next 10 years, the sidewalk was overtaken on both sides by the Brazilian Peppertree, vines, crepe myrtles, and other undergrowth.

When the project got enough interest to start the second phase of work, Clear Cut Forestry Mulching owner Tim Hileman got the call.

"We had a drone out looking for the sidewalk and you couldn't see it," Hileman said, explaining the degree of overgrowth present. Collectively working off blueprints and with the engineers, the team believed they knew where the sidewalk was hiding. Now they just needed to find a way to get to it.

The shortest distance between two points is a straight line. So Hileman started at one of the community's access points and cut himself a half mile long trail through the woods to the suspected sidewalk location.

"We never would've been able to get in there any other way…Then we saw the beginning of the slab and started following it."

Around 1,500-ft. later Hileman found the other end.

After freeing the sidewalk, Hileman cleared 10 ft. of room on either side. This allowed the engineers to finally access the sidewalk to assess it before working on the connecting bridges. Two and a half days of work gave a community their sidewalk back.

The Brazilian Peppertree is so invasive and common in Florida that Hileman encounters it at nearly every job site. Thankfully for Clear Cut and its clients, this undergrowth is easily tamed by Hileman's Fecon Bull Hog mulcher. 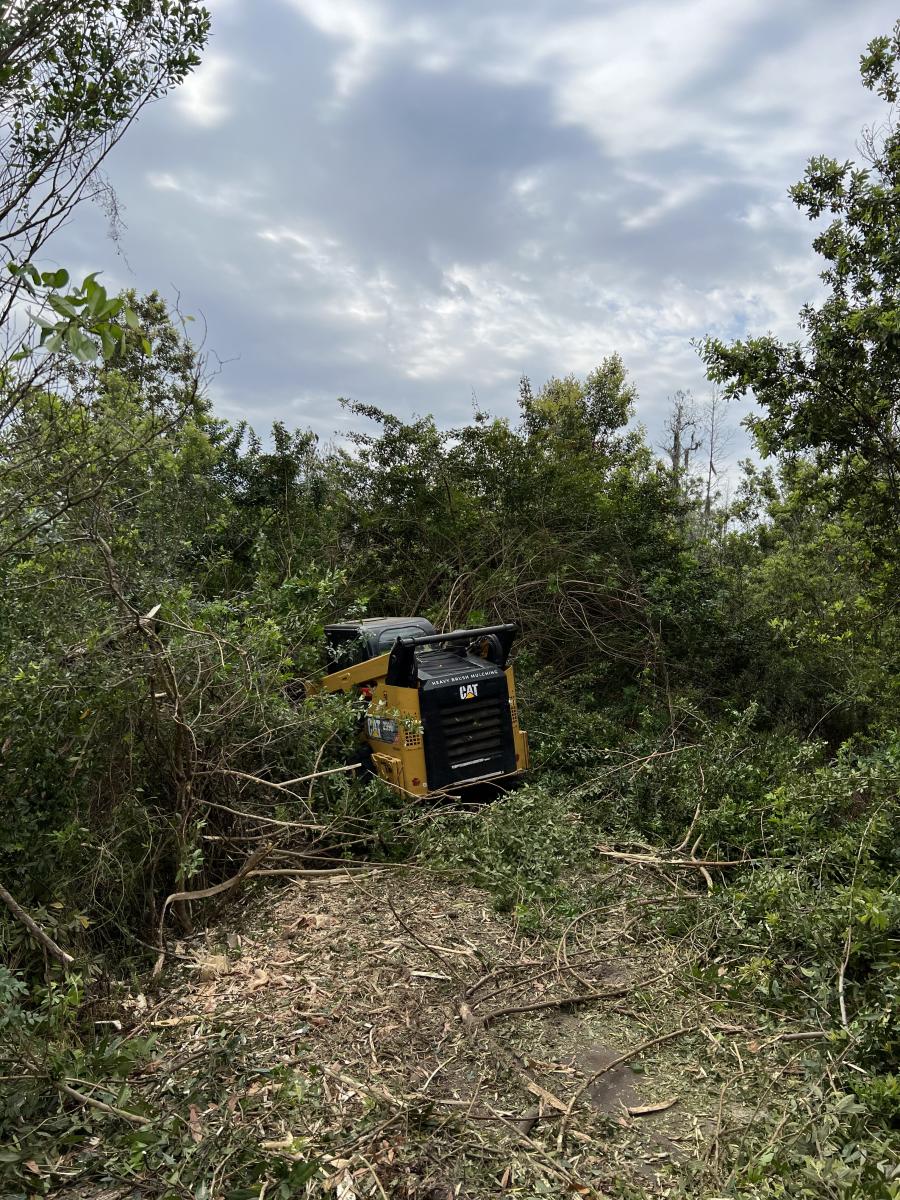 Over 10 years, the sidewalk was overtaken on both sides by the Brazilian Peppertree, vines, crepe myrtles and other undergrowth.

Fecon's Bull Hog mulcher is an extremely durable mulcher with the ability to mulch up to 6 in. material with ease due to its bite-limiting rotor design and a variable speed motor which automatically adjusts to maximize rotor-speed and torque to changing material loads.

Thirty double-sided, Samurai knife edge cutting tools are mounted onto the FGT style rotor, creating a 61 in. cutting width. The attachment requires 30 to 45 gpm flow at up to 6,000 psi, which is delivered by a Caterpillar high flow skid steer.

The FGT rotor system features a smooth rotor surface, spiral tool pattern and innovative tool shape for efficient cutting. Hileman sharpens his blades twice a week and flips them after every 15 running days.

When it comes to mulcher attachment maintenance, Hileman greases the head every morning with four pumps and then another four pumps at lunch on the bearings.

Hileman had such a good experience building his business with his Fecon mulching attachment that he decided to stick with the brand when it came time to grow his equipment arsenal. Pairing another used Fecon Bull Hog mulcher with a brand-new 299D2 XHP Caterpillar, Clear Cut continues to serve the Tampa area with its reliable and durable equipment built to deliver in the toughest working conditions. 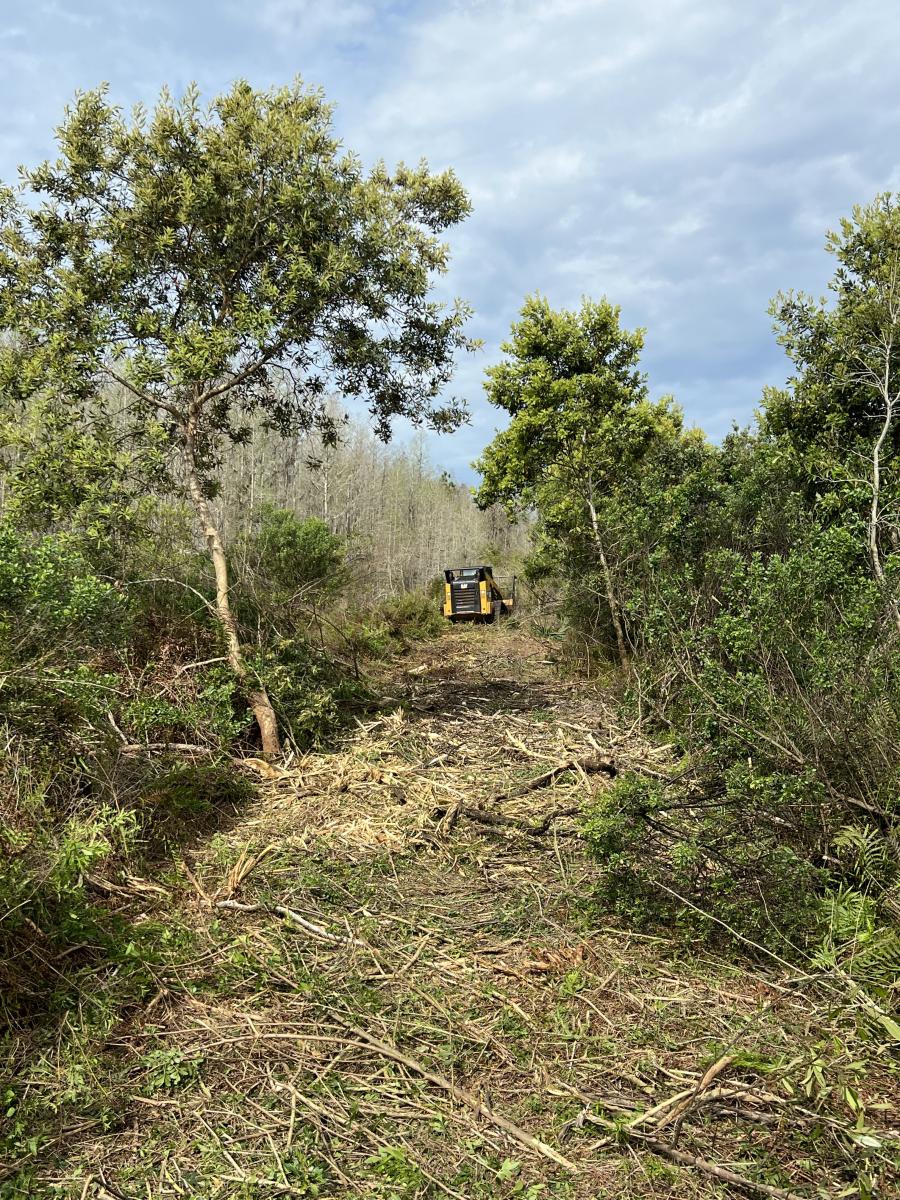 Clear Cut Forestry Mulching owner Tim Hileman started at one of the community's access points and cut himself a half mile long trail through the woods to the suspected sidewalk location.

Some say word of mouth is the most effective marketing. When someone is so moved by their experience with a brand that they must tell someone else about it, it can be a very persuasive sales tactic. A personal recommendation was powerful enough to convince Hileman to drop what he was doing and follow a friend into the mulching business. Hileman even purchased his first mulcher head attachment straight from him.

Mike Cram with Heavy Brush Mowing started his business in Brevard County, Fla., with a Fecon Bull Hog mulcher. Fast forward seven years and Hileman realized he could do the same…with the same exact mulcher.

"I always saw Mike's videos but never paid too much attention to them. Then one day I had a meeting at one of his job sites and I saw the mulcher and was just blown away."

Hileman was impressed, and had such a good friend in Cram, that he was able to borrow Cram's whole rig and trailer to do his first ever job in Brevard County. Cram then taught Hileman how to use the equipment to not only clear the land but also to make it look presentable after the fact. He provided Hileman with industry expertise in addition to equipment.

Hileman was so moved after getting to use the equipment that he decided to purchase the seven-year-old mulcher from his friend.

"As the bearings are good, the head's balanced, and the pumps are good, regardless of what the attachment looks like, it'll still run just as good as new."

While the act of mulching is an act of removal, Hileman's work is sometimes addition by subtraction, like when he gave a community their sidewalk (and future plans) back by removing the brush. 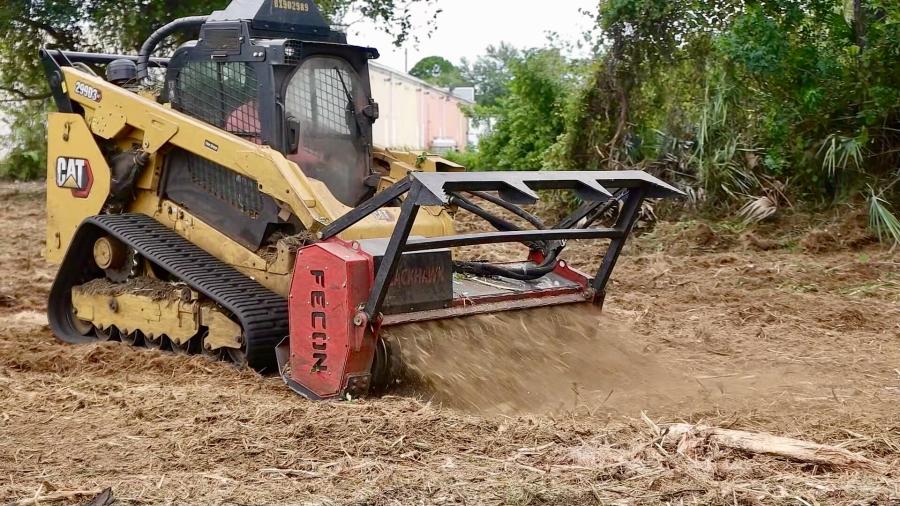 Fecon's Bull Hog mulcher has the ability to mulch up to 6 in. material with ease due to its bite-limiting rotor design and a variable speed motor which automatically adjusts to maximize rotor-speed and torque to changing material loads.

As a school principal who grew up on a farm in North Carolina, Lance Honeycutt is passionate about education and heavy machinery.