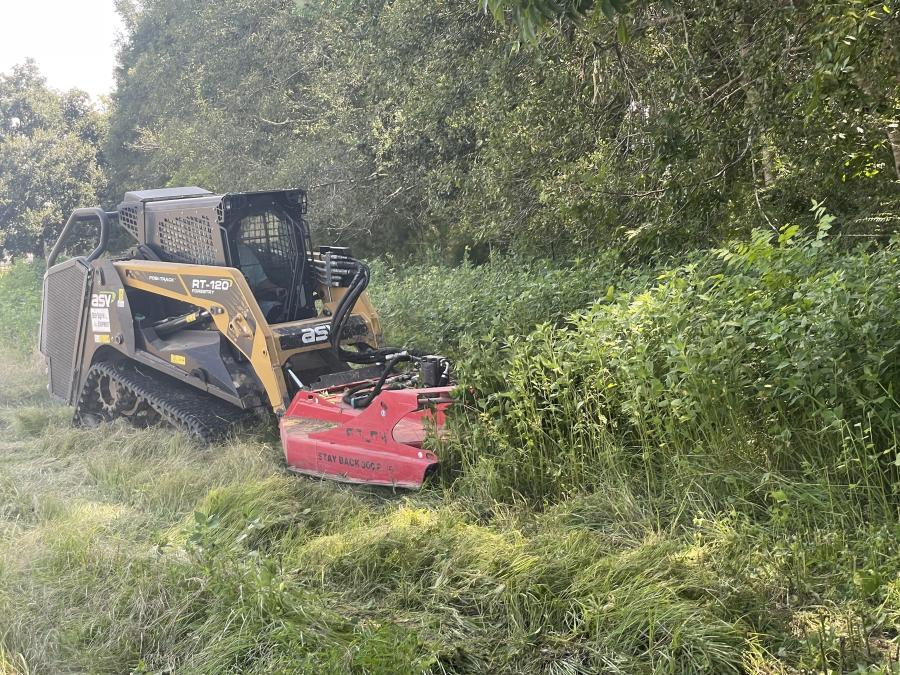 Todd Hyatt opted for a Fecon FDM74 deck mulcher and an ASV RT-120 Forestry model to clear the Chinese tallow trees, oaks, elms, pines and all the underbrush that surrounded them.

Todd Hyatt is familiar with forestry mulchers, having used them on land clearing projects, pasture clearing and around his own property.

They tackle brush as well as felled and standing trees, leaving a carpet of mulch in their wake. They are a good "go-to" tool for an aesthetically pleasing project. He also knows that not every job requires the fine grinding that mulchers provide. So, when Hyatt purchased 20 wooded acres in south Louisiana, he wanted an ace in the hole.

Hyatt opted for a Fecon FDM74 deck mulcher and an ASV RT-120 Forestry model to clear the Chinese tallow trees, oaks, elms, pines and all the underbrush that surrounded them. He was pleased when he got it cleared in record time, with much lower operating costs.

Deck mulchers have been around for years. Armed with rotary blades, they are a good way to mitigate brush, eliminate small trees, and other vegetation management projects. Unlike other deck mulchers, the Fecon is designed and built with "heavy duty" in mind.

Hyatt likes how much sturdier the Fecon deck mulcher is than his previous mulcher heads, saying "If you hit a good log, it used to bend the housing [on his previous deck mulchers]. Now it's built so heavy I don't have to worry about that."

Anything too big to cut through still isn't a problem due to the stump-jumper feature, which allows the Fecon to ride over stumps or other debris without risking bolt shearing. This makes it much easier to clear areas that are unfamiliar and could have large rocks or cinderblocks or other various detritus scattered throughout.

Riding over these obstructions saves time and money, especially compared to drum mulchers. When a drum mulcher hits a stump, it can break a tooth, which costs both time and money. Depending on the severity of the damage, the teeth may need to be replaced before it can he run. This downtime can be expensive both in terms of actual costs, as Hyatt noted that the teeth are not inexpensive, and lost production time.

Hyatt appreciates how forgiving this feature can be to users, commenting "If you hear the blade hit, you can back up and ride over it. If you hear other mulching heads hit it's too late, you've already broken teeth."

By eliminating the threat of damage and repairs, the stump-jumper feature makes clearing areas much faster and more economical.

A 2-in. wider cutting area allows Hyatt to cover more ground with each pass, further enhancing his productivity with the Fecon deck mulcher. Serrated brush hooks pull debris in to clear piled material or fence rows faster. Specially designed two-sided blades effectively double service life without having to flip the blade. Easily accessible hydraulic hose connections allow Hyatt to reverse the cutting direction to use the opposing side of the blade.

According to Hyatt, "It doesn't slow down. Unless you get into something really big, it's as fast as you're willing to ride it."

That toughness and durability gave Hyatt the peace of mind to load up his FDM74 and travel to central Texas where he cleaned up a ranch used primarily for recreational hunting. The mountain juniper, cedar, elm and black oak ranged from 3 to 8 in. in diameter, but neither they nor the hilly, rocky terrain were an impediment. It was hard to determine productivity in acres/day because a lot of what Hyatt was mulching was fire lines and food plots rather than clear cutting or forest thinning. He estimated that the deck mulcher was 1/3 faster than a drum mulcher in actual mulching time, and on this project would be much faster because the rocky soil would wreak havoc with drum mulcher teeth.

Hyatt was so astounded at how fast it operated on these projects that he's got plenty of projects lined up for it. He splits his time — about half working his own land and half contracting out, including a 560-acre family ranch in Westhoff, Texas, where he'll take the senderos, mesquite, elm and huisache trees from a riverbed.

He's excited at how easy the job will be, saying "It's going to be a bunch of trees, probably four to six inches big around, and that thing ought to go right through them."

With six integrated tie downs and lift points, Hyatt has no trouble loading and securing it during transport between job sites. Secured to a Big Tex Flatbed Trailer, he hauls it anywhere and everywhere with his Dodge 1-ton truck.

Hyatt bought the deck mulcher and the ASV RT-120F from Deep South Equipment in Baton Rouge, La., who he described as "Very knowledgeable and helpful during and after the sale."

Having the right tools in your toolbox can make all the difference in a land clearing project. Hyatt thinks of his Fecon FDM74/RT-120F combination as his "ace in the hole" and knows that whether he's clearing on a pipeline project, under-brushing ranch land for hunting, or cleaning up his own properties, with the FDM74 the deck is stacked in his favor. 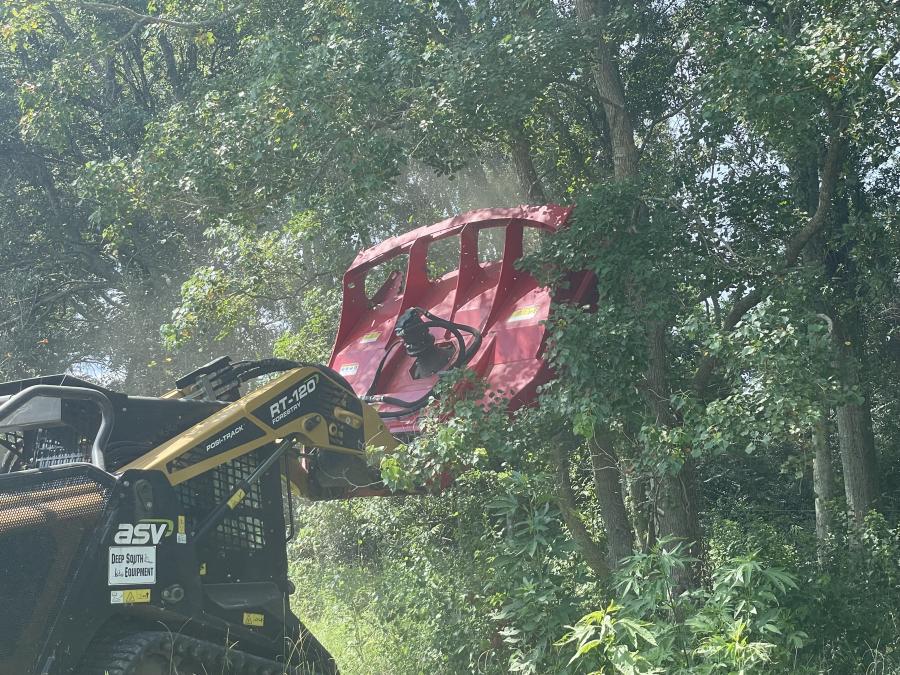