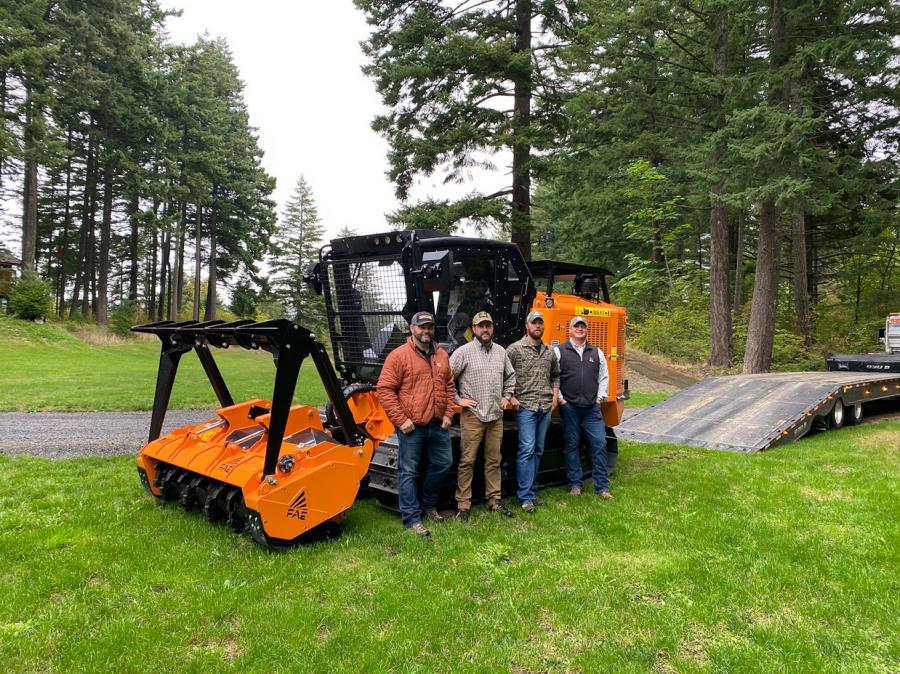 Kurt Patterson and Andrew Hubbel own a land management company that services the communities in the Columbia River Gorge, between Oregon and Washington states.

"Forestry grooming is a specialized industry where it isn't traditional forestry or logging and it's not landscaping," said Hubbel.

"We are the first ones to do this in this part of the northwest and the feedback from our customers and the Oregon Department of Forestry has been extremely positive," Patterson added.

"It tends to be long, stringy and still a hard to access terrain," said Hubbel.

"The product itself is not easy to move through. It is often done with modified feller bunchers or heavy excavators with external cooling units that go through and just blow the trees up, but it checks the box of helping with reducing the fuel load," Patterson added.

According to them, forestry grooming is much different.

"The family that FAE has put together with their PT line, from the 175 up to the 475, puts an unmatched product on the ground," said Hubbel. "It basically makes it an instant park."

"The forestry grooming jobs we do are first and foremost, something that everyone wants to look at. The product we leave is one that you can instantly access, where recreationalists are able to walk, hike, bike, use motorized ATVs and horses. And the feedback we receive is amazing, we hear that people are no longer discouraged from walking through or afraid to get hurt if they step on it, and this is true for every area that we have treated with our PT-175," he added.

In a nutshell, the difference between forestry grooming and the more traditional approaches to fuel reduction work in such heavily dense and wild areas is the quality of the final product, which in addition to being more effective at decreasing fire fuels, also leaves the terrain in a fully "groomed" condition that allows for recreational activities, enhancing the overall value and attractiveness of the land for local communities.

"The other really huge and determining factor was the support. Chris McKinney at Pacific JCB and Mike Sampels, our FAE representative, spent a lot of time with us in the field. They were a guiding hand, working with us, helping us get set up and going. That was hugely beneficial and it made our ability to jump in and hit the ground running with the 175 much easier, compared to any other manufacturer we've worked with so far," said Hubbel.

"The PT-175 speaks for itself, it's a great machine, but when it comes with that type of support, that really changed the game for us, it was everything we could have hoped for."

For Patterson "it was a hundred percent trust."

"They came out and made sure the machine was exactly the one we needed for the applications we were applying it to."

As the primary driver of the PT-175, one of Patterson's favorite features is "the winch housing on the back, which does an amazing job of protecting it," he stated.

"That poor devil takes a lot of the hits and I don't know how anybody would ever buy a machine without one. It does a lot to protect the backend, the radiator and, to some degree, the roof. We even reinforced it because we are really depending on this machine to do a hundred percent of the heavy lifting in the woods.

"Where we work is borderline rainforest. We're looking at old grow stands on the slopes of Mount Hood to include heavy maples and string oaks. These are substantial trees with a very mature and substantial undergrowth. In the Mount Hood Valley and Columbia River Gorge we are running into a lot of the traditional northwest vegetation like doug fir, grand fir, western cedar and lots of dense native white oak that is several hundred years old. When we're up higher in elevation it is scrub oak and one of the worst ones, the super stringy vine maple.

"With the counter cutters and then the manner in which you stagger the cutters, on just two passes with the PT-175, you can make vine maple look like the rest of the types of trees that we can get into and make a nice product."