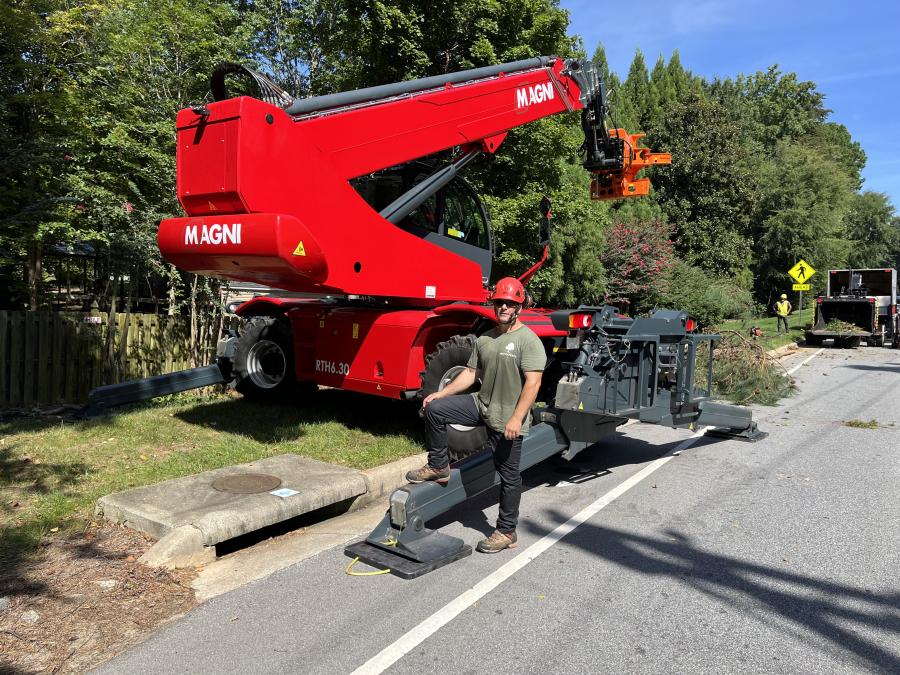 Robert Rogg enjoys his job working with trees, whether he is trying to help make them grow or clearing them away due to storm damage. (CEG photo)

Robert Rogg enjoys his job working with trees, whether he is trying to help make them grow or clearing them away due to storm damage. Every job is different, though the degree of difficulty varies widely from project to project.

"I love the challenge that they often present, like picking up and disposing of trees after a huge storm has moved through the area, and all that entails," Rogg said recently at a job in one of Greensboro, N.C.'s many leafy neighborhoods. "Taking trees off houses is definitely a challenge each time. It requires a skill in thinking through the process beforehand and how to do it without causing any more damage to the house."

An expert tree professional and trained arborist, Rogg has owned Tree Experts in Greensboro for 30 years. His is a small operation, with just himself and two other people, including, on occasion, his teenaged son. But he also employs 10 of the best machines in the tree-handling business, along with four trucks.

His latest acquisition, though, is quickly proving to be the one that will literally drive Tree Experts to new heights.

"Our most recent addition to the Tree Experts fleet is a Magni RTH 6.30 telescopic handler," Rogg said. "We bought it from Pinnacle Cranes in Midlands, N.C., because after having done this work for a long time, I am trying to make the job as easy as possible on our bodies. 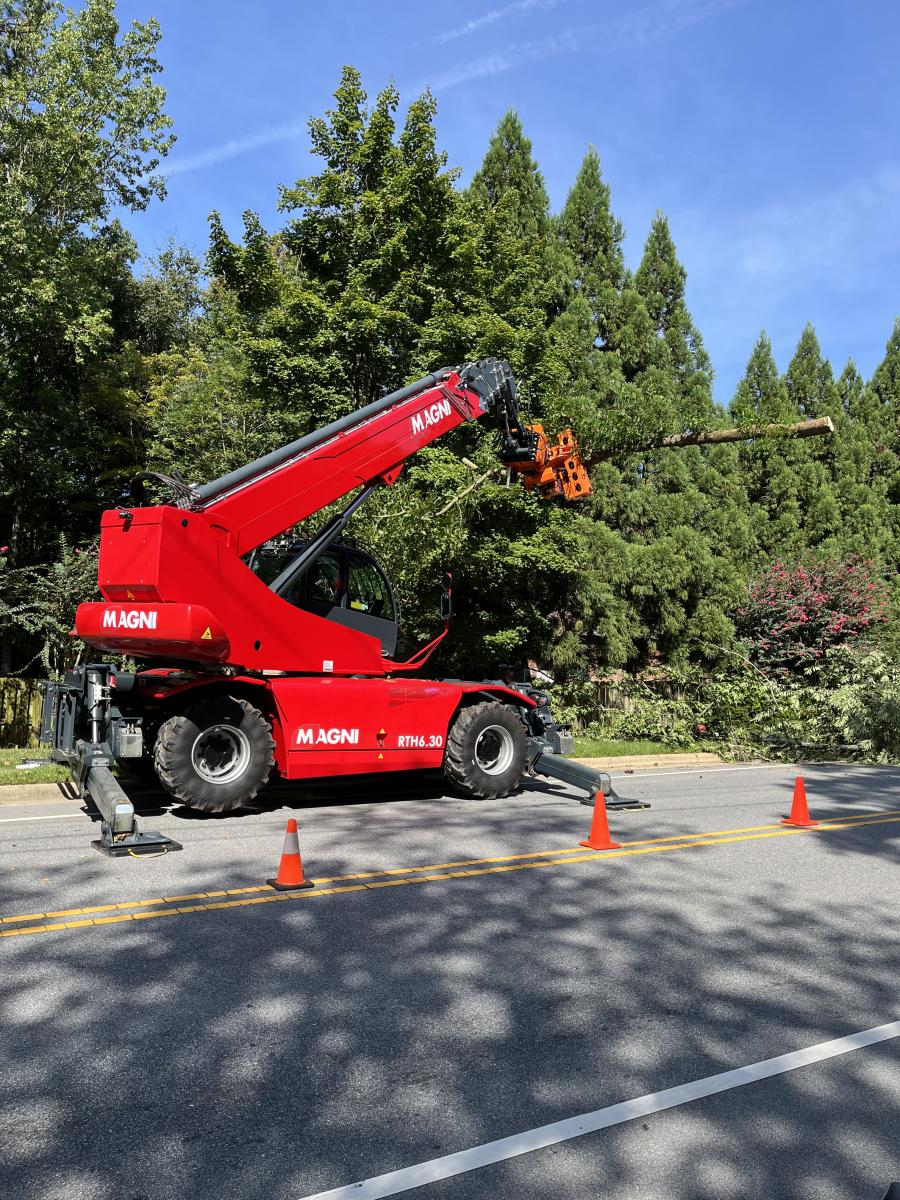 "It has been an amazing piece of machinery, I must say," he added. "There is a learning curve to it, just like with anything else, but we are figuring out just how well it works each time we take it out."

Rogg noted that from his research before buying, the 6-ton Magni telehandler came equipped with a remote control that can maneuver the crane to a higher lifting capacity per ton than others.

"That convinced me that this machine would be the best fit for us," he said. "Using it has been wonderful, and I am so glad we purchased one. And, buying it through Pinnacle Cranes was phenomenal, and we had a great experience in working with [company president] Jim Mackinson and his team."

Once he put the Magni RTH, or rotating telescopic handler, into the thick of the action, he quickly realized the other advantages that come with owning the piece.

"You can reach almost to 100 feet with this machine," Rogg said. "At that height directly above you, it can support a wood cracker attachment that weighs 2,000 pounds, and you can still grab-cut 3,300 pounds of wood material, which is really quite impressive. Once you get even closer, the Magni lets you grab and hold 10,000 pounds to lift over houses and fences."

He learned from Pinnacle Cranes, too, that Tree Experts was one of the first companies in North Carolina to obtain a Magni telehandler with the accompanying wood-cracker attachment. The manufacturer is based in Italy, but its products are distributed by dozens of dealers across the United States and Canada.

Made for One Another

Rogg recalled that when he came to North Carolina from Connecticut years ago it was simply to look for a respectable job. Once in the state, being a tree climber, to him, seemed like the best choice.

"I picked up a job with another company and learned from them for about six months or so before just going off on my own in the business," he said.

That led to his forming Tree Experts, and, throughout the years, as his list of clients and projects expanded, he continued buying more equipment to make the job easier and more efficient. 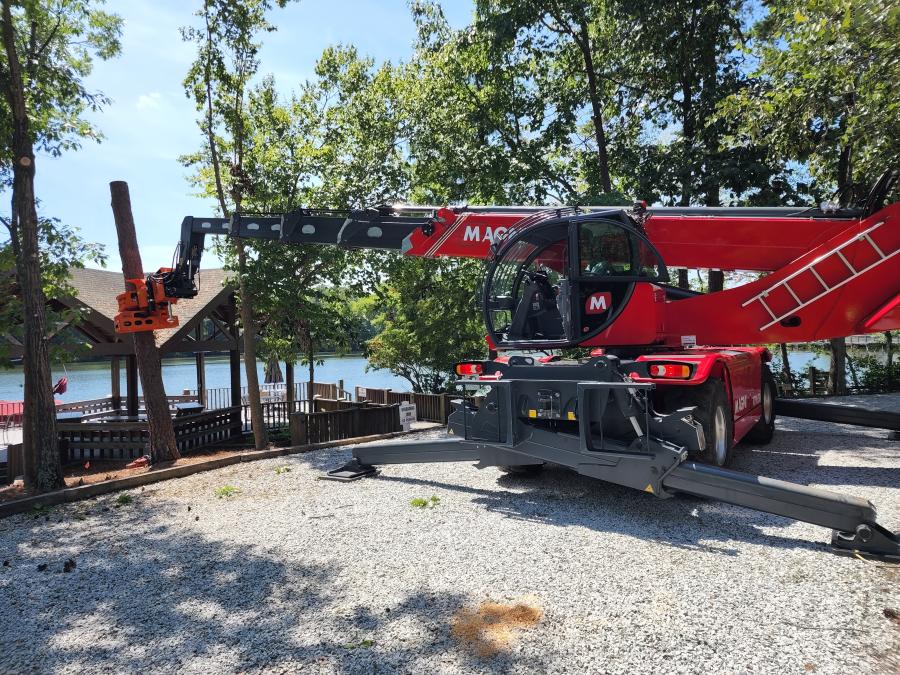 On the day he spoke with CEG, Tree Experts was working for a Greensboro homeowner in removing branches from three trees. But with the home, an outbuilding and a fence close by, Rogg said the job required the precision of the Magni telehandler.

"It just makes the job instantly easier instead of using a bucket truck or climbing and roping branches out, and then having to bring that vegetation around from the other side of the fence," he said. "You are making three cuts versus 30 cuts, so it is a big timesaver. It will allow us to wrap up this job later in the afternoon after we process all the natural material. When we work in backyards, this is normally what we do."

Rogg added that Tree Experts typically limits its work radius to within about 15 mi. of his Greensboro home, but with such a large population base in that part of the state's Triad region (encompassing the cities of Greensboro, High Point and Winston-Salem), he has all the work that he can take on.

"It is hard to travel to other places because we are always so busy here in Guilford County. However, there are select jobs that we will accept. For instance, I am bringing our operation down to the coast this weekend because there are some special clients of mine in Morehead City that I will travel five hours to serve."