Although Upstate Brush Control may be a small operation, compared with its partners in the venture, its impact on the equipment industry through social media continues to grow exponentially.

Jon Byrnes founded Upstate Brush Control in Taylors, S.C., in 2014 after years of searching for what type of career suited him best. His eureka moment came at a chance encounter where he saw a skid steer in action — one equipped with a mulcher on its front. 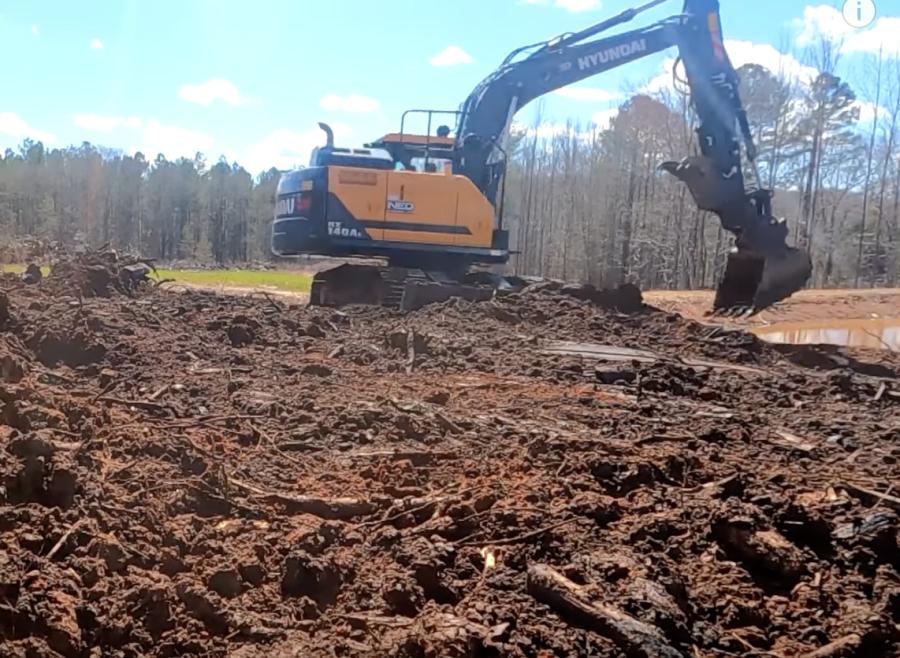 "My jaw just dropped at seeing what this piece of equipment could do," he said. "I had never seen one before and I was just blown away that you could take it in the woods and chop up trees and brush. After that, I started researching the forestry mulching industry, how the business works and what its brands were. I also began to look up videos on YouTube."

Now, he pairs his infectious personality and love for his work with creating instructive videos about the machines he uses on his company's projects. As a result, Byrnes has gained the trust of thousands of followers who subscribe to his YouTube videos, from which millions of views have been tracked. The high rate of "likes" and comments on his videos speak to his engaging style.

They have become so prominent that one need only type "forestry mulching" into a Google search and several of Byrnes' videos are among the first to appear.

"YouTube is our main platform, but we do have Instagram and Facebook accounts that we link our videos to," he said. "I think that we are at about 56,000 subscribers currently, and we have gotten 16 million views."

Soon, Byrnes' popularity and the style and quality of his videos began to attract the attention of big-name equipment manufacturers and dealers, eager to use different social media platforms to market their machines.

Simon, a friend of Byrnes, did so at a Social Media Influencer Meet & Greet hosted by Hyundai Construction Equipment.

"I told [Rogers] I was in the forestry mulching business, and I was the only guy there that worked specifically in that job," Byrnes said. "Everybody else did the work, but it is not their main line of business."

At the time, he was looking to expand the equipment in his company's yard to include larger machines beyond Upstate Brush Control's tracked mulchers and small excavators.

"Corey asked me to stay in touch with him after the show and that is what I did," he said. "We did not know what equipment size to get — it came down to what they had available — but I wanted a machine with a dozer blade on the front.

"I am a very strong believer in the Lord and in my faith, so I was praying that they would be able to find a machine with a blade," Byrnes said. "I wanted one because running a forestry mulcher with a blade on a bank or over a hillside gives you a little bit more stability."

Rogers and the equipment maker's representatives were impressed enough with Byrnes and his enthusiastic videos that they worked out a deal to present Upstate Brush Control with a full-size Hyundai HX140AL excavator, weighing in at 34,000 lbs.

Byrnes was thrilled to get the machine, which came equipped with auxiliary hydraulics, a quick coupler, a Rockland hydraulic thumb and heavy-duty bucket — and the front-dozer blade that he prayed would be included.

In one of his latest YouTube videos, Byrnes showcases the new Hyundai excavator and what it can do on a job site where the goal is to clear the land of trees and underbrush. In it, he expertly guides the machine off the back of a flatbed truck before moving it into the dirt while several of his skid steers can be seen moving piles of logs and underbrush in the background.

Throughout the demonstration, he talks about the Hyundai's quiet ride, how it handles, the ease with which it takes down trees and how it moves piles of vegetation. In addition, he takes the video camera inside to show YouTube watchers how well an operator can see his surroundings while running the excavator. He also notes some of the features found within the Hyundai.

NED and Upstate Brush Control have a three-month agreement in place that allows the forestry mulching company to use and promote the machines it has obtained through NED, Byrnes said, in exchange for his producing weekly videos.

"There is nothing that says we must do so many videos for so many hours for NED, but whenever we get on a job, someone here will video either the skid steer, the excavator or the mulcher in action," he said. "I am not recording every job — only select projects. For one thing, taking job videos is a lot of work. Today, we are doing so because there is no huge rush in getting it done. On some, though, when it is late in the day, and we have a long drive ahead of us to get back home, we will not shoot a video."

Besides receiving the Hyundai excavator, Byrnes noted that everyone he has worked with at NED has been extremely helpful, including the people in the parts and service department at the nearby Columbia dealership.

"They have gone above and beyond for us, and we have been most impressed with their efforts. If there is a problem with the excavator, I just call them, and they take care of the issue promptly."

Byrnes grew up in South Carolina's Upstate, the son of a homebuilder, and spent time around his father's construction projects since the age of five. During his teen years, he went to work for a fence contractor for four years, before subcontracting under his own business for another four years until 2007.

But, in 2008, Byrnes said, most work began to dry up due to the Great Recession.

"We had focused on large farms in our fence business using equipment like skid steers," he said. "My dad ended up moving out of his business and we partnered together for about three to four years to build houses and additions, but I began to want to do something different." 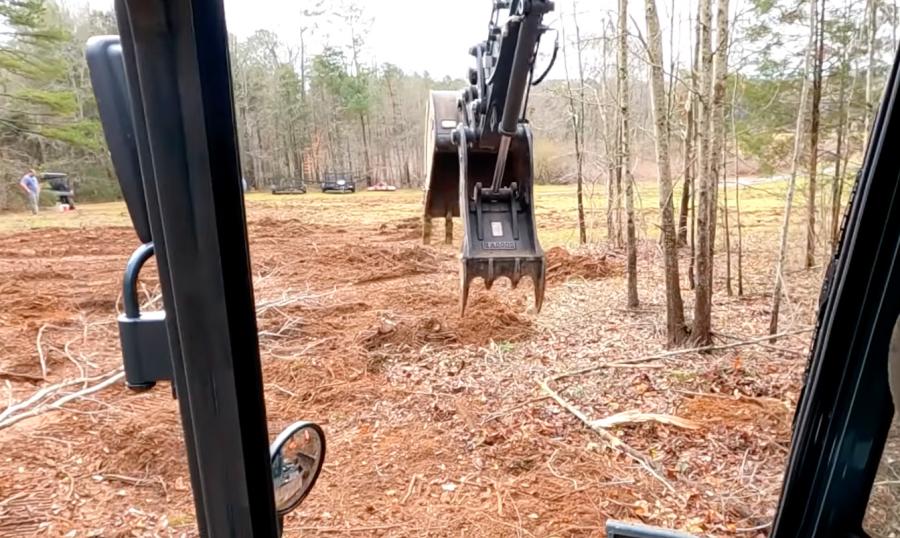 He considered entering the military, which he respected, but soon realized that his faith was pulling him in another direction.

"A buddy of mine asked me to go hunting with him down near Columbia and when we pulled up to this place, that's when I noticed the skid steer with a Fecon mulcher on its front," he said.

With both the construction business and the military on his mind at the time, the career-altering moment clarified to him that what he liked doing best was driving equipment and performing doing tree work, which, ultimately led him to a career in forestry mulching.

"My brother owns a hardscape company where they install interlocking pavers and work on big driveways, and he needed another tracked skid steer, so we split the cost on one," he said. "It was my first compact skid steer, a Bobcat T300 compact. That was eight years ago and after making sure this was the type of work I wanted to do, my company now has two ASV skid steers, a Bobcat E45 compact excavator, a John Deere 130G mid-size excavator and a John Deere 450J LGP dozer that my brother and I also bought together."

Along with the new Hyundai HX140 excavator, the hardware Upstate Brush Control uses has taken it from handling simple mulching jobs in the early days to now being able to do large land clearing projects.

"There are two sides to our business," Byrnes said. "One is the forestry mulching, which is cutting up underbrush and small trees, beautifying wooded areas and cleaning up ponds; and the second part of our work are larger jobs that require the excavator and dozers, the traditional land clearing where we take everything out and create a home site, cut out a driveway and dig a basement."

He credits the three guys — Will Walker, Josh Gallant and Micah Pust — that have worked for him for the past several years as keys to the company's success.

Seeing Other Videos Leads Him to Make His Own

Not long after starting his business, Byrnes began watching Fecon videos on YouTube, in addition to those of various contractors.

"My wife, who has a background in photography, suggested that I should just start making my own videos to show customers what we could do," he said. "Soon, I would go out to a job and say to them, ‘We're going to take this machine, mulch everything down and cut it up.' They told me they had never seen anything like it before, so I would get my phone and pull up a YouTube video to show them, adding that the machine in the video was not mine, but that I had one like it."

He has no doubt that the social media aspect of his business has become a critical element to its success.

"There is absolutely no question that YouTube has opened a whole new world for us," Byrnes said. "We get a lot of our work via the platform and from people in the Upstate that are just Googling our company and watching the videos to see how we work and act, as well as the quality of the work we do. I would estimate that 75 percent of our business comes through people watching our videos on YouTube." CEG