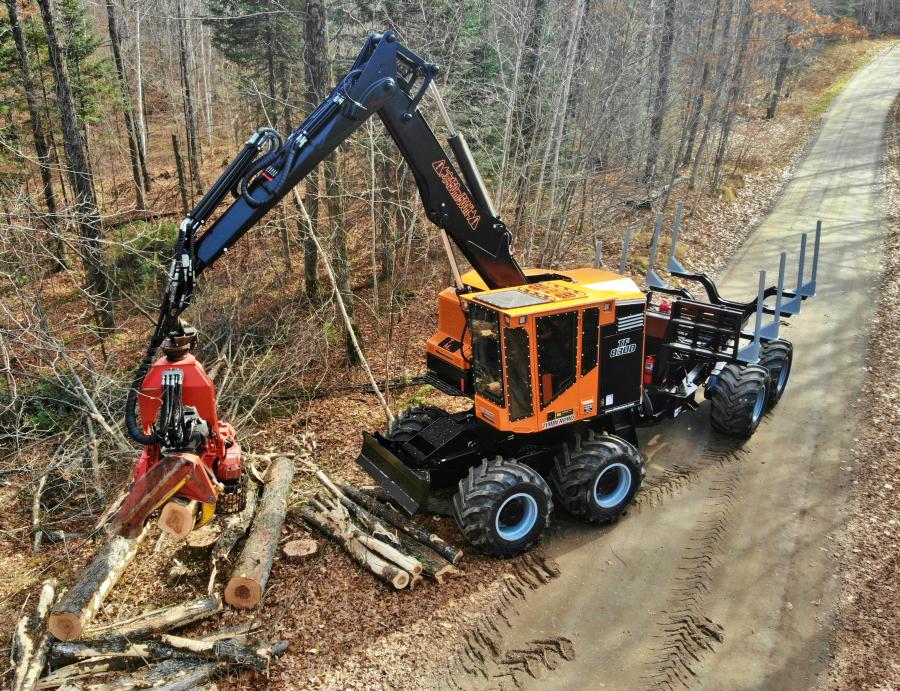 CrossTrac Equipment is focused on delivering machine solutions for loggers that maximize value, performance and reliability. The company said it has established a strong leadership position with innovative products, and backs them up with product support that understands the unique needs of loggers.

CrossTrac also is a strong supporter of Great Lakes manufacturing. Its most prominent lines are built in the area. The company's motto is "From the Great Lakes, for the Great Lakes." This strategic priority made it easy to partner with LiuGong and Dressta to add construction equipment to its lineup. 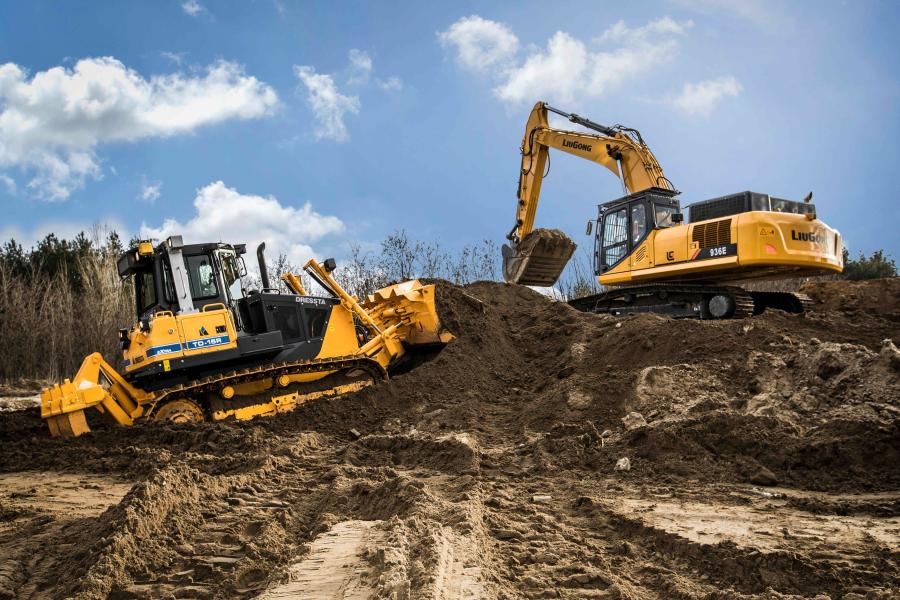 LiuGong excavators and wheel loaders offer a combination of premium components and warranty, all at a price that makes them very competitive options for new equipment, according to the company. Cummins and Yanmar engines; Rexroth and Kawasaki hydraulics; and ZF axles put global leaders in the most critical areas of the machines. LiuGong supports these with a 3-year, 4,000-hour bumper-to-bumper warranty. On larger machines, this is extended to 5 years and 7,000 hours for the powertrain.

LiuGong is one of the largest construction equipment manufacturers in the world. Starting in 1958, its presence was built on wheel loaders. The company has since expanded its product line to include excavators, skid steer and compact track loaders, motor graders, fork lifts and several other machines. Not all of these are available in the United States yet, but there is a plan to offer them in the near future.

Excavators in the United States currently range from 1.8 to 50 metric tons. Wheel loaders range from 2.5 to 7.1 cu. yds. CrossTrac added LiuGong to its offerings earlier this year. Reception has been brisk, and customers have praised the power, smooth operation and solid stance of the machines.

Dressta dozers have a long presence in the United States, especially in the Great Lakes. Starting out as a product of International Harvester, these machines passed through Dresser and Komatsu before ending up in Poland as a product of Huta Stalowa Wola (HSW). LiuGong bought the company in 2012, and has invested heavily since then to upgrade and modernize the designs. New versions of its TD8 and TD9 models will be offered later this year.

So how are these machines "from the Great Lakes"? Excavators sized 15 metric tons and up are assembled in Prentice, Wis. LiuGong has partnered with SpecSys at the former assembly plant for Caterpillar's forestry products. Caterpillar shuttered this facility in 2016. SpecSys acquired it the same year and has continued to expand its business of contract manufacturing, product design, project management and other services for the heavy equipment industry.

In addition to supporting Wisconsin jobs, this arrangement benefits CrossTrac by having new unit inventory accessible and close by.

Hitachi Capital is LiuGong's financing partner for wholesale floor plan, retail sales and CrossTrac's rental units. Flexible programs, promotional rates and an appetite for deals have been a huge contributor to the early successes in delivering machines to customers eager to try these new machines. Hitachi also offers financing for other lines of machines, both new and used.

The additions of LiuGong and Dressta have not just expanded the products CrossTrac can offer. Hitachi financing has made it possible to launch a rental fleet as well. Excavators have been the most common request, though wheel loaders also have found traction. As snow season comes around, rental of wheel loaders is expected to be in high demand and Hitachi has special financing programs for these seasonal opportunities. 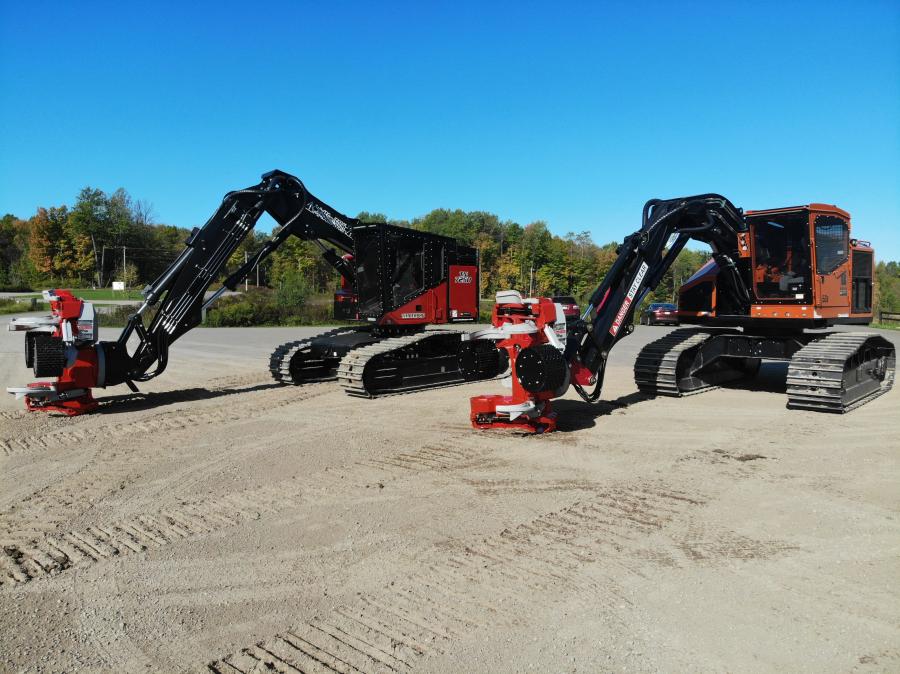 LogMax introduced its fixed head in 2011. Jon Goettl and Pioneer Equipment (the former name of CrossTrac) worked with Log Max to develop the 7000XT fixed head, and it was so successful that Goetti has never bought another brand of head since then. Over the years, LogMax has made several improvements to the heads. Upgrade options for the saw unit, measuring wheels, knives and several other components demonstrate Log Max's commitment to continuous improvement.

JP Skidmore introduced its CF-18 head in 2013. A rotary design that allows continuous 360 degrees of rotation quickly set it apart by eliminating the risk of broken hoses or electrical connections due to over-rotation of the head, according to the manufacturer. JP Skidmore now offers the CF-19 and CF-22 heads for larger trees and machines, and has recently added a top saw option.

Complementing these processors are two tracked machines, both with long legacies tied to industry legends. TimberPro machines are the second iteration of Pat Crawford's innovation, launched five years after he sold Timbco. Now on its fourth design generation, these machines are highly refined and reliable, the manufacturer said.

Barko introduced its tracked machines in 2013. Far from being a "first swing" effort, though, the design and development of these machines was led by Robin Peterson, the man who founded and grew Fabtek before it eventually landed with Caterpillar. (His son, Jesse Peterson, is the owner of JP Skidmore.) Barko is on the second iteration of these machines, though there have been many refinements within each generation.

Dangle heads offer the ability to cut from angles other than facing straight on to the tree. This dictates the direction the tree will fall, but it is still a passive method that can be difficult to control when trees are close together or have large branches. With a fixed head, the operator is able to cut the tree, then lift and place it wherever it's needed, including directly behind the machine.

This "direct control" is the single most significant difference between dangle and fixed heads, but there are others. With a fixed head, the carrier can be converted to a feller buncher in a matter of a few hours (provided the hydraulics are properly specified). 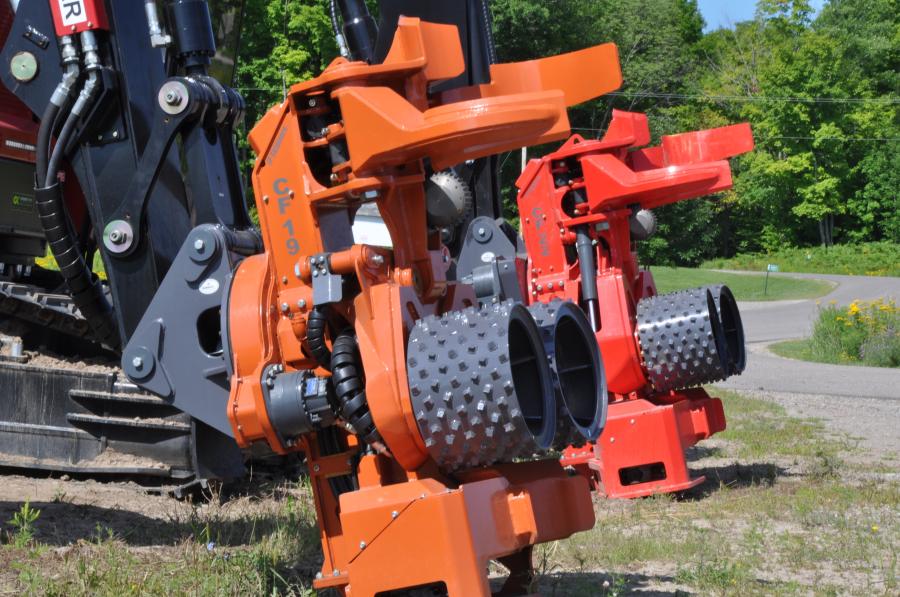 According to the company, fixed heads also are significantly lower in initial costs and in repair and maintenance. Hose failures and wear also are lower, resulting in better operating costs and uptime. This ruggedness leads to better resale values when it comes time to trade the machine in. In the used equipment market, CrossTrac has seen a significantly higher demand for fixed-head track machines than for dangle-head units.

Because the fixed head is a more "active" control than the dangle, the learning curve for these heads is much shorter. Planning for where a tree will fall is less of an issue when you can place it exactly where you want. Even operators who have never run a harvester can be producing wood in a short amount of time. This makes these machines a preferred solution for contractors in applications like right-of-way clearing for pipelines and powerlines, where experienced operators are not always available, according to the company.

CrossTrac offers the SP Maskiner line of dangle heads. The company has targeted and understands the unique needs of Great Lakes loggers. Since its launch just a couple of years ago, the 661 LF head has delivered on the SP Maskiner's goal to have a head that fits the trees in Wisconsin and Michigan.

What was once thought to be a niche product with limited prospects has now become one of the most sought-after machines CrossTrac offers. A purpose-built version of TimberPro's 830 forwarder is equipped with dedicated hydraulics and a dangle-head processor to produce a machine that can switch roles in less than 15 minutes.

The most intuitive feature of having a combo machine is that a single machine can perform two functions. What is less obvious is that it also requires only one operator and one freight movement to have a fully functional "team" on a site. A logger is truly independent and self-sufficient in getting wood from the stump to the landing.

For a contractor with multiple teams and working on multiple projects, the combo machine also offers the ability to "right size" equipping a project by leaving a single operator to finish up a location while the rest of the machines move on to another job site.

With a more than 30-ft. reach and a lift capacity of more than 6,000 lbs. at that distance, there are a number of processing head options available for attaching to the TimberPro. CrossTrac Equipment is a dealer for Log Max and SP Maskiner and has sold and installed heads from both manufacturers on these machines.

CrossTrac Equipment is a logging-focused dealer that is dedicated to delivering the performance and value its customers need to thrive in a tough, competitive industry.

This article first appeared in the Great Lakes Timber Professionals Association August Newsletter and was reprinted with permission.