Port Hawkesbury's Investment In People Pays Off With Sennebogen

Port Hawkesbury Paper recently added a third Sennebogen log handler to its fleet after the first two accumulated a total of 100,000 service hours.

The Port Hawkesbury mill site has a long history of positive contribution to the eastern region of Nova Scotia.

The mill was first developed in 1962 as a sulfite pulp mill and expanded into manufacturing newsprint and pulp for the next three decades. In 1998, the Port Hawkesbury site expanded again by investing in a supercalender (SC) paper machine. In 2012, the mill at Port Hawkesbury was reopened by Stern Partners as Port Hawkesbury Paper and today continues to operate as a world-class high-tech paper manufacturing facility.

According to Mark Farrow, the same can be said of the mill's wood yard.

In 2012, when Stern Partners purchased the mill, they reopened it with $5 million worth of new processing equipment and facility upgrades. One of the upgrades was a new live-log deck. Loading heights averaged over 22 ft. (7 m), beyond the reach of their legacy log-handling machines. The need for higher loading capability led the mill to its first Sennebogen 830 M-T purpose-built log handler.

Mark Farrow credits his team of factory-trained technicians for the long life and reliability of his log-handling fleet.

The 830 quickly proved its value, loading directly from incoming trucks up to the feed deck. The elevating Maxcab brought the operators' eye-level up above the deck for a clear view into their work zone. With its specially designed undercarriage, the log-handler also came through with the strength to fill and pull 80,000 lb. trailer-loads up and down a 40-ft. (12 m) rise to the site's upper wood yard.

The 830 could do it all, without relying on other machines to help it stack, load or pull. In due course, as the mill's success led to full production and round-the-clock shifts, a second 830 M-T was added to the yard fleet.

Recently, Port Hawkesbury Paper commissioned its third 830 M-T. And that first unit, purchased almost nine years ago, is still on the job.

"This is a tough machine," Farrow said. He is the mill's mechanical maintenance planner/supervisor, and he has been on site there since its reopening.

"It's mechanically sound and gives us great runnability for our operation. The first one is up to 58,000 hours now. Our technicians gave it a new engine two years ago, at 42,000 hours. It was still working fine; we just wanted to be proactive and head off any risk of it going down. We didn't want to be down to one machine."

The Secret to Machines' Longevity

Farrow said that the only time his 830s stop is when they have to refuel. Between unloading trucks, feeding the deck and picking logs from the stockpile, the 830s are always moving all over the yard.

Conditions can be difficult, and he said, "Some spots can get wet; it's rough; there are slight hills in the yard. But we've never had an issue with towing anything anywhere in the yard. They handle everything we throw at them."

The Sennbogen equipment is clearly built for durability and reliability. Based on Sennebogen's material handler platform, the undercarriage of the 830 M-T is specially engineered for the stresses of log yard duties. Reinforced to handle heavy pulling stresses, it also features dual transmissions, serving each axle to pull through muddy spring yard conditions and challenging grades.

But Farrow said the secret to his machines' longevity is the people who look after the machines.

"We have four service techs on staff who keep them running effieciantly," he said. "These guys are professionals at what they do, and all work as a team. The techs here are very involved in the operation and are a key factor in why these machines keep running the way they do."

All four techs on the service team have completed Sennebogen's week-long "Level 1" factory training program, provided at no cost at the firm's Training Center in Stanley, N.C. Plans were in place for them to also attend the Level 2 training school for advanced troubleshooting. However, COVID-19 forced a postponement but, according to Farrow, it is on the books to get them there as soon as they can.

"I'm a very ‘Trustworthy' supervisor with them," Farrow said. "We use the Computerized Maintenance Management System Avantis at PHP. They know the system, they know the equipment, they're computer savvy. They monitor all PMs and control the work order flow. Along with all the other equipment, they keep things in order and enter important data when closing work orders for future reference. A highly skilled and self-reliant group of guys for sure."

Farrow also credits the strong working relationship between the technicians and the operators in the yard.

"Our operators have respect for their equipment. They take good care of the machines. They report to the operations manager at the end of every day, so any little thing that comes up, the techs can pick it off quickly. The technicians and operators all know each other, too. They are in touch using two-way radios. If there's something the operator needs looked at right away, one of the techs can get into the service truck and look after it right onsite." 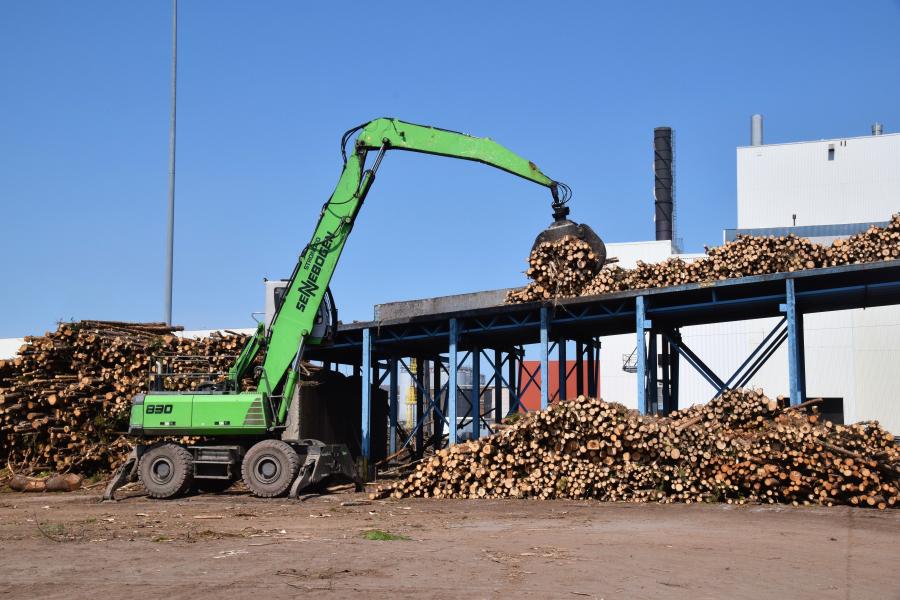 The ability to safely feed a new 22-ft high loading deck was a key factor in the decision to switch to purpose-built Sennebogen log handlers.

Located on Cape Breton Island, Port Hawkesbury's only connection to the Canadian mainland is through a causeway landing 5 miles up the road. However, the mill has had no problem ensuring that its technicians have a steady supply of parts.

"We have a good relationship with all the people at Strongco [Sennebogen's authorized dealer in the Canadian Maritimes]. We keep a lot of parts here in our own inventory. We stock the service kits that Sennebogen packages up for our machines. Sennebogen also uses a lot of standard, non-proprietary parts that we can buy locally. Even our hoses: we get them made up locally and coded for each machine, and we can make some of them here in our shop. When we planned to exchange the engines, they were here quickly; only a week out, and they could have been faster if we had needed them."

Last year, the management team decided to bring a third Sennebogen 830 M-T to the wood yard. This is Port Hawkesbury's first machine in the new E-Series lineup.

"The big change is in cab comfort," said Farrow. The operators really like it. They can work comfortably whether they are up high or down low, moving or loading through long shifts."

"We're saving with the new Cummins T4F engines, as well. Sennebogen's Eco Mode reduces the RPMs automatically to save fuel when they're idling."

Based on results with the first two Sennebogens, there was never a question of which new log-handler to purchase.

"The techs are so familiar with these machines; they can hear a noise from the machine when they're walking across the yard, and they know what's wrong. With the factory training they got along with the serviceability and reliability of these machines, choosing a Sennebogen was the best business decision."

Bad Berka is a small health resort in the German region of Thuringia. Here we meet Sandra Eule, one of very few Wood-Mizer female contract sawmills in Germany.

Eco Log has added its own series of harvester heads, consisting of four models, to the existing line-up.

The new H423 from Waratah Forestry Equipment is designed to carry out a wide range of harvesting jobs from early to late thinnings, and even light regeneration harvesting.

The cutting unit on all Komatsu C-heads, Constant Cut, will receive an upgraded design, effective June 1.