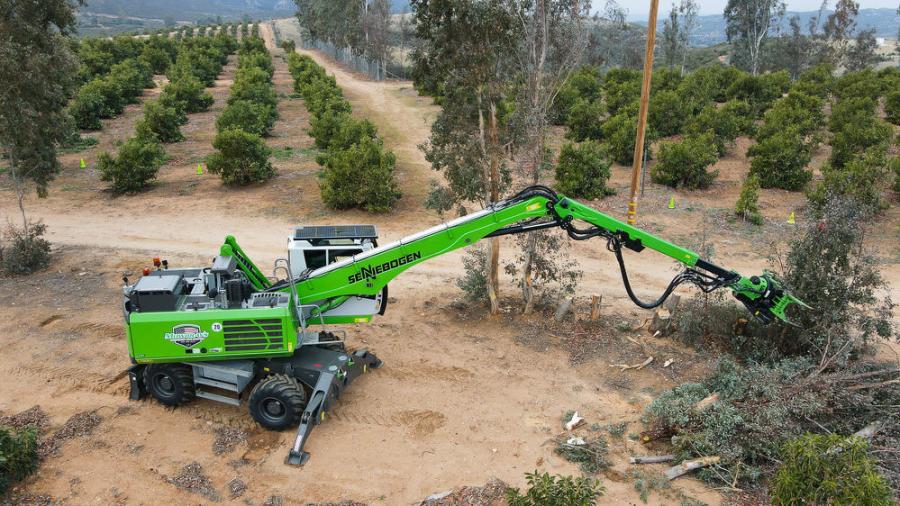 With the cab extended, the operator has a great view of the work in front.

An army of arborists and tree care specialists have spread throughout California to clean up the debris and charred remains from this past year's record wildfires. The recovery effort has taken a big step forward with the delivery of a new fleet of Sennebogen tree care handlers, signaling the arrival of mechanized equipment for tree removal.

At the forefront of this clean-up is Mowbray's Tree Service, which is based in San Bernardino, Calif., and manages crews throughout the state. Richard Mowbray, along with his father and grandfather before him, built their business providing vegetation and tree maintenance services for California's largest energy utilities.

This year, Mowbray's has deployed crews of approximately 1,500 tree care workers plus up to 30 subcontractors with another 800 employees.

"Utility customers represent pretty much the entirety of our business," said Mowbray, CEO and president of the company. "We're known for vegetation management, right-of-way maintenance and high-hazard tree removal."

Mowbray's launched a new service division dubbed Mechanized Tree Removal. This newest division of Mowbray's is built around the capabilities of the Sennebogen tree care handlers, primarily the 718 M model. Mowbray's is well accustomed to using specialized tree care equipment, including a fleet of 75-ft. aerial lifts, cranes and grapple trucks. But with the 718, Mowbray sees a new level of productivity and safety emerging in the industry.

"As soon as I saw it, I knew that this was the future and we needed to get our hands on some of that equipment, immediately," Mowbray recalled. His first encounter with the 718 came — at Sennebogen's invitation — on a trip to Boston the previous November. There he met with one of the first professionals to put a 718 to work, Jason Yerke of Distinctive Tree Care.

His mind was quickly made up. "As soon as we got back, I met with Robert Amadore, our asset manager, and we ordered our first one," Mowbray said. "We started running it in January and saw what our first operator could do with it. Then we looked at all the work coming up in fire response and started ordering more Sennebogens."

Since then, Mowbray's Mechanized Tree Removal fleet has grown to 11 machines with two more on delivery and the first 728 M expected to arrive in the spring of 2021. "The 718 is a good size for us," said Mowbray. "It's a small package, easy to move around. The 728 will give us a little more reach; we get a lot of trees that are 100-feet plus, so we'll be getting more of those. I really like the 738 too; it's much bigger and heavier and I know we'll eventually have one."

Previous Sennebogen customers have said that the 718 is a "game changer" for their industry and Mowbray agreed. "We recently worked on a project to take down nine large trees around a SMUD substation; with obstacles to work around down below. The operator was able to go in there like a surgeon and piece out and dismantle the nine trees safely in a day. A competitor was there last year, using the old ways, and it took him four days to bring down two trees.

Along with their productivity, the 718 and 728 (coming soon) are easy to transport quickly from site to site. Both machines are within the size and weight limits allowed to be moved on state highways without special permits. The crew can simply drive the machine onto to a flatbed trailer, lash it down, and go.

But productivity was not the sole factor behind Mowbray's commitment to the Sennebogen way of doing things. "The driving factor for us was reducing human exposure and providing a safer working environment. Other machines can do the work, but the Sennebogen takes the employee out of the danger zone," Mowbray said. 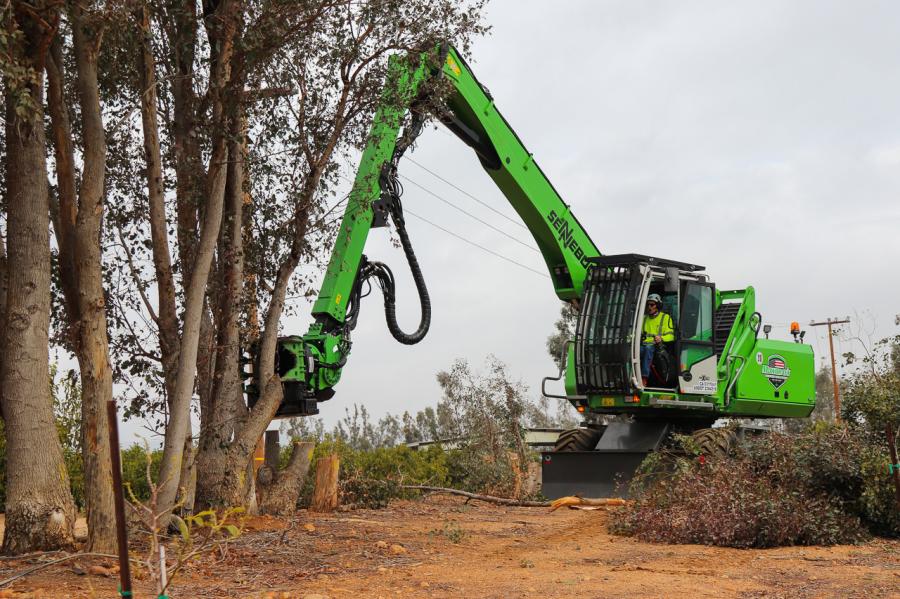 Mowbray is well aware of the hazards involved in tree removal, considered by many to be among the most dangerous of professions. Mowbray learned the business, literally, from the ground up. He began his career on one of his father's ground crews and worked his way through the ranks. His last stop, before taking on the role of CEO, was as corporate director of safety.

"With this equipment, we can make the work environment safer, reduce the number of employees on the job site and we can get the job done faster than we could before," Mowbray said. The difference, he said, is that one operator can do the work of a full crew, all from the safety of an enclosed, elevated cab. "For us to go out and take down 40 trees and get them out where some other equipment can clean it up, we might have had 10 or 15 employees out there before. Now we can do the exact same work with one person operating the Sennebogen and a climber working around the power lines, so we are down to two employees doing that much work, or more."

This new technology allows Mowbray's to make better use of its skilled arborists and groundsmen. "It takes us a lot of years to train employees to where we feel comfortable letting them out to climb a 100-foot tree," Mowbray said. "But we've taken people who have never before cut down a tree and, and within two weeks in the Sennebogen, they're taking down 40 trees a day.

"But we still have a lot of routine maintenance to do for the utilities, such as tree-trimming around the power lines," Mowbray added. "I don't think we'll ever be able to do that with a big machine. So if we don't have to put an employee up in a tree for tree removal, the 718 frees him up so we can increase our crew count for the maintenance jobs."

To help Mowbray's get its mechanized team up to speed quickly, its first operator attended a free two-day orientation at the Sennebogen Training Center in Stanley, N.C. Since then, Sennebogen trainers have visited California to spend time with each of Mowbray's operators. "These operators are younger guys, the video-game generation," Mowbray said. "They run the boom like it's an extension of their arm."

Mowbray's is the first large tree care specialist to be equipped with Sennebogen machines, but the company's owner is convinced that they will become a more common sight over the next few years. "We can do trees for a lower cost to the customer," Mowbray said, "and it's a safer environment for the operator. It saves lives, time and money. So that's a win-win-win for everybody."