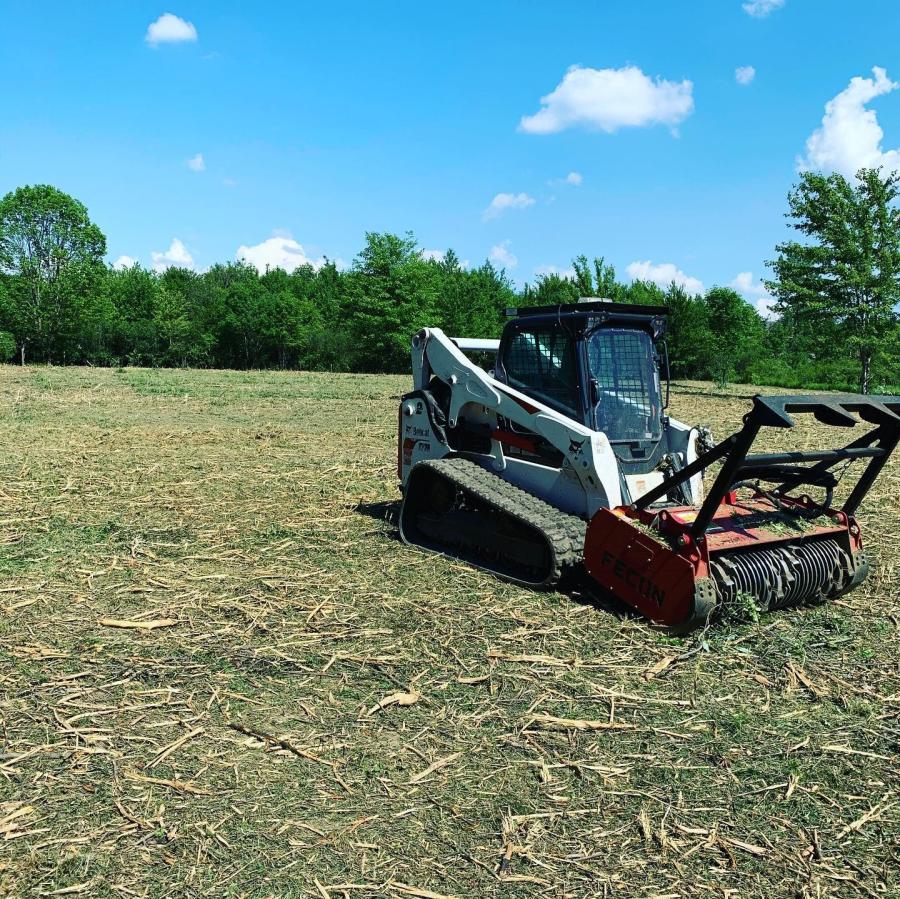 Whether a project calls for clearing hundreds of trees or a hundred acres of brush, Adams brings the whole Hammer Down team (himself and his Bobcat 770) to tackle the job. Thankfully for Adams he's got the right equipment and support team around him to keep his business running and his customers happy.

Nestled in Perry, Ohio, Hammer Down tackles both residential and commercial land clearing and beautification projects. At first, Adams went from job to job renting mulchers and trying out different brands, before making the investment for a more permanent attachment solution.

While looking to upgrade his equipment, Adams knew that he needed an attachment with the durability and uptime to keep his business running smoothly.

Then opportunity met preparation on the lot of Company Wrench in Cleveland when Adams demoed Fecon's BH74 Bull Hog.

Bull Hog mulchers are designed for any machine and have a variety of tool options to meet the demands of any project Hammer Down could need. Adams liked the attachment and the demo unit pricing so much he left the dealership with the demo unit in tow.

The Bull Hog is manufactured just down the road in Lebanon, Ohio, so Adams figured that parts and service support would be quick — whether it was coming from the factory or from Company Wrench.

The heavy steel materials and the quality welding that goes into each mulcher also was evident to Adams.

Adams's first job using the Bull Hog skid wasn't a walk in the park: A 2-acre land clearing project with 250 to 300 eight-in. diameter birch trees, some up to 150 ft. tall.

So how do you level more than 100 ft. tall trees to ground level? One at a time.

Thankfully the Bull Hog's depth control rotor (DCR) helped Adams pace out his work, keeping the mulcher from over biting, which in turn keeps the carrier from bogging down and ramping back up to operating speed.

The DCR control rings provide a smaller bite to create a fast cut with less horsepower draw. When processing lighter materials, the machine is running at higher RPMs and takes more bites per second with finer material sizing. On heavier materials, the Bull Hog delivers more rotor torque to keep the rotor turning when other machines stall. Compared to Adams's other mulcher experiences, the DCR provided a noticeable difference in production, he said.

"It was a no-brainer to go with the depth control rotor to keep production high and, obviously, keep wear and tear on my machine lower as much as possible. It just makes your machine run more efficient compared to all of the others that I've run."

With a clean slate to work with Adams's customer was able to plot and plan out their future garden center business without losing the forest for the trees.

In-between jobs, Company Wrench supplied Adams with a fresh set of 30 Viking Axe tools to put on his used Bull Hog which opened up even more possibilities for him.

"I thought the Fecon was performing very well from the rip. Then, when I put those brand new teeth on, wow, did that change everything."

The DCR Viking Axe blades are reinforced behind the knife's edge for increased strength and can be easily flipped to reveal a new cutting edge. That keeps Hammer Down cutting for twice as long.

The steel blade's design also produces a finer output. Compared to sharpening the teeth every eight to ten hours, Adams's new teeth only require sharpening after 20 to 25 hours of use, which translates to more uptime and more full days mulching. If Adams ever feels like he needs a quick fix he keeps a cordless grinder in his service truck to keep things moving during projects, he said.

In addition to giving the teeth a look at the end of the day, and sharpening as needed, Adams gives the zirc fittings a shot of grease. In between jobs he pressure washes the carrier and mulcher and gives both a more thorough inspection once the forest dust, dirt and detritus has been washed away.

Adams put his new teeth to use on a two-day 4-acre beautification project in Chesterland, Ohio, clearing out underbrush, apple trees and a thick wooded area with trees ranging from 4 to 6 in. in diameter. The job cleaned up a few different tree line areas on the sloping property and enabled the homeowners to see their pond from their home.

Engineered and built to withstand all types of mulching conditions, Fecon's Bull Hog skid steer helped Adams clear everything in his Bobcat's way down to ground level.

Adams knew when he demoed Fecon's Bull Hog unit at Company Wrench that he was ready to upgrade his land clearing equipment. Now with a few projects under his belt, he is just starting to understand the value his gear is adding to his workflow. His advice to other sole proprietors looking to get into mulching? Keep up with maintenance schedules, take your time, and of course, be safe.